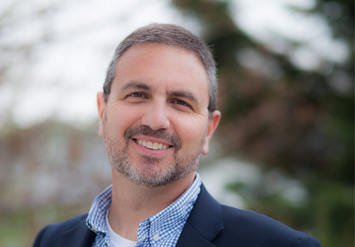 Mike McLaughlin began serving Grace as Pastor in June, 2013.  He and his wife Charlotte have been married for 24 years.  They have three children, Connor, Kelly, and Aiden and a couple of silly dogs named Murphy and Fergus.  Mike enjoys coaching soccer, woodworking, and has recently tried to learn the guitar which he is very bad at playing.  He is also fluent in Portuguese and proficient in Spanish.  In his "free time" he serves as a chaplain with the St. Charles County Ambulance District (SCCAD) and coaching soccer for Impact City FC.  Charlotte has a Bachelor of Science degree from Covenant College and a Master of Accounting from the University of Missouri-St. Louis.  She has also served as a CPA with KPMG. Currently, Charlotte serves her family as a homemaker and does bookkeeping for Covenant Christian School.

Mike was raised Roman Catholic in St. Louis, Missouri, and at the age of 17 he received Jesus Christ as his Lord and Savior while participating in a Young Life camp in Florida.  He earned a Bachelor of Arts degree in Communication from the University of Missouri-St. Louis in 1999. After serving several years as the leader of Young Life at Lindbergh High School, he felt the call to the pastoral ministry.  Mike then went on to attend Covenant Theological Seminary in St. Louis, Missouri, and graduated with a Master of Divinity in 2002.

Upon graduating from Covenant, Mike first served as Assistant Pastor of Church Planting at Redeemer PCA in McKinney, Texas in the North Texas Presbytery from 2002-2003.  After serving at Redeemer, Mike was led by God to move his young family to plant a new PCA church, Crossroads Fellowship, in Albuquerque, NM.  Mike served for 10 years as the Senior Pastor of Crossroads Fellowship (now known as City Presbyterian Church).

Mike’s heart for ministry is to consistently proclaim the gospel of Jesus Christ to believers and unbelievers.  He has a vision to reach the lost and to disciple Christians to grow in their relationship with our God.  Mike also wants to equip believers to make a meaningful difference in the community and world in which they live in.